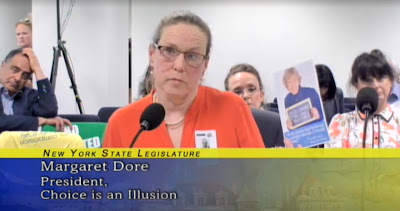 On May 3, 2018, Margaret Dore, president of Choice is an Illusion, testified before the New York Assembly Health Committee in opposition to Bill A.2383-A, seeking to legalize assisted suicide and euthanasia. The bill was based on a similar law in Oregon.

Proponents had sold the bill as limited to assisted suicide, with euthanasia (direct killing) prohibited.  Dore, a practicing attorney, pointed out that the apparent prohibition was gutted by other language in the bill, so that euthanasia was in fact allowed.

Dore also testified that the bill would apply to people with years or decades to live. To illustrate the point, she held up a smiling photo of her friend, Jeanette Hall, talked out of assisted suicide in Oregon eighteen years ago.

On June 21, 2018, the Legislature closed without voting on the bill, effectively killing it.